Yoga is science: it is a direct science. ‘which is beyond religion, faith, and superstition. Is experimental science. It is a complete medical practice. A complete route is – Rajpath.

Through this, the coordination of the human body, brain, and emotions is established. In the eyes of some people, it is just such an action to benefit the body in which the human body is benefited through various asanas and postures (by turning or pulling the body). But they are unaware of the fact that this is only the beginning of it.

According to the Shivsiddh Yogpeeth, it is a glorious part of the ancient Hindu civilization, which keeps man’s mind and body healthy from time immemorial and leads to spirituality.

Vinyasa Yoga tells you that if you want to know God, know the truth, attain attainments or just be healthy, then Patanjali says that one must start from the bottom of the body. Change the body, the mind will change. If you change your mind, your intellect will change.

Just as Einstein’s name is paramount in the world of external science, similarly, Einstein is Patanjali of the world of inner science. Just as the Himalayas are superior in the mountains, similarly this is superior in all philosophies, laws, policies, rules, religions, and systems.

During the 200-hour Hatha Yoga, it is taught that with the initial five limbs it prepares to enter the vidya, that is, the practice of swimming is limited to these five limbs before crossing the Bhavsagar by leaping into the sea. Without doing them, you cannot cross Bhavsagar and those who do not jump by doing them will remain here. Many people become successful in these five and destroy their lives by telling the miracles of yoga.

Teachers of Sivsiddh Yogpeeth say that it is not just an asana or an action that only serves to keep the human body healthy, the basic task of Yoga teacher training is to attain the height of spirituality where human beings are free from the weight of these worldly bonds. It seems to me it is the only gateway to the realization of that Supreme Father God. Hatha Yog also includes the peak of meditation that is attained after a long practice.

The first experience is a physical experience. In which the native starts feeling after some time. By practicing a few days of Hatha yoga, the person gets rid of diseases and starts feeling changes in his body. The first task of this is to make the human body healthy and energized.

The second experience appears on the brain and thoughts (feelings). From the human mind, it is proving to be effective in overcoming all these mental ailments like stress, anxiety, depression, negative emotions.

The third experience leads man to spirituality. By liberating us from worldly restrictions and worries, it leads to the ultimate unit where only bliss is bliss.

There is a sense of service in Karmayog. According to this yoga, what we are getting in the present day, what we have got is the result of our past deeds. Therefore, if a person wants to make his future good, he will have to do such actions in the present time so that future time will give good results. Karmayog is not made by doing one’s own work but by serving others.

describes the focus and focus of the Supreme Father, the Supreme God, who is the creator of this world. In Bhaktiyog, the subject of focusing feelings towards devotion has been told.

The most difficult branch of this is Gyanyog in which intelligence is developed. The main task of Jnana Yoga is to make the Jataka advance the path of knowledge to the intellect by studying texts and verbally.

It is also called Ashtanga Yoga. It has eight limbs which are as follows: Yama (swearing), niyam, asana, pranayama, pratyahara (control over the senses), Dharana, concentration, and samadhi. Asana yoga is given more space in RajYog because this action is simple as well as being the primary practice of RajYog.

It benefits human life in all ways, physically, mentally and spiritually. Let us know what are the benefits of yoga:

1- All types of mental disorders such as anxiety, stress and negative thoughts can all be overcome by this. Along with making the body energized, it also provides strength to the intellect.

2- Its regular practice provides strength to fight against diseases. The immune system of such a person becomes strong and diseases like cold, cold and fever are kept away according to the weather.

3- With this practice, the exercise of the entire body is done automatically. Its different actions make the body healthy from outside and inside.

4- The person practicing it is always happy, such a person gets respect in society and also competes fiercely in difficult situations.

5- A person who practices regularly keeps away from bad addiction and bad company and makes his future golden by moving towards spirituality.

6- Pranayama is also a part of this, through which the internal organs of the liver, stomach, lungs, heart, kidneys, etc. get the appropriate amount of oxygen, which keeps them healthy for a long time.

7- Through this, the entire body benefits. Yoga is no less than a boon to fight any incurable disease and to get rid of diseases. 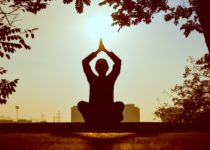